What happens to a billion dollar weather satellite once it is no longer needed?

What do you want to know

Weather satellites provide more than a pretty animated backdrop behind the forecaster during a weather broadcast.

These complex, multi-billion dollar machines are over-engineered to overcome many obstacles once in orbit. Because once they’re in orbit 23,000 miles away, there’s no way to fix them or upgrade them.

The GOES (Geostationary Operational Environmental Satellites) series of meteorological satellites was first launched in 1974 with GOES-1.

In addition to cloud images, they provide essential information for computer weather models that help predict weather around the world. These variables include snow cover, water vapor, sunspot activity, and even wind data aloft to help hurricane forecast.

In fact, it was the GOES 13 satellite that provided us with images of Super Hurricane Sandy in 2012.

Weather satellites have an average useful life of 10 years. Technology improves so much over a 10-year period that new technologies can make the next generation of weather satellites much more powerful.

For example, the GOES-13 weather satellite launched in May 2006 featured “Y2K” technology. Do you remember the capabilities of a mobile phone in the year 2000 (other than making calls)? He didn’t do much by today’s standards.

Newer weather satellites have such high resolution that they can clearly see the eye of pinhole hurricanes.

Every year when a new flagship phone is launched, many choose to trade in their old device, which is then repurposed or sold as refurbished. The same can be done with billion dollar technology orbiting the planet.

Now that the new weather satellites have replaced GOES-13, what about the old satellite? GOES-13 mostly works, but is no longer needed in the eastern United States, where it served dutifully for eight years in active mode (2010-2017).

Because weather satellites only see the hemisphere they are on (see box), these satellites must be moved around the planet to get a better view of clouds in new areas.

While Europe and Asia have weather satellites similar to the latest GOES fleet that provide coverage over their respective parts of the globe, only one satellite exists focused on the Middle East, and it is due to expire soon. 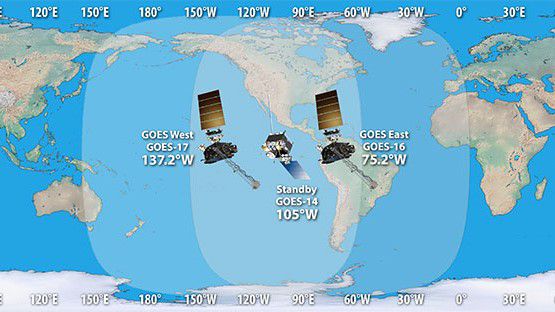 This is where the military comes in. The US Air Force is responsible for providing accurate weather forecasts for operations in the Middle East.

In addition to classified weather satellites, the military uses Europe’s Meteosat-8, which is expected to run out of fuel later this year. GOES-13 was built with an additional five years of fuel, extending its life to at least 2025, or beyond.

Because the east coast satellite cannot see the weather over Afghanistan, it had to be moved. Thus, “the little satellite that could”, propelled itself on a seven-month journey from the skies of New York to the skies of New Delhi, a distance of almost 40,000 miles along the arc.

During this movement, its cruising speed was seven miles per hour. Since geostationary satellites always sit above the equator, its new address will be above the Indian Ocean.

GOES-13 is not the shiny new satellite you expect to see from the US military. The satellite actually has irreparably broken parts, making it partially functional.

Of course, but the process of commissioning a new satellite takes many years. For example, the contract to build and launch the current GOES-13 satellite was put out to tender in the late 1990s! It’s so much faster and more cost effective to reuse what’s already in space.

In addition to a new address, the satellite has also been given a new name: the Electro-Optical-Geostationary Infrared Weather System, or EWS-G1. It will provide weather information to the Space Force division of the US Air Force.