According to the National Oceanic and Atmospheric Administration (NOAA), for the second time in less than a year, a key weather satellite has failed, forcing a replacement satellite to enter service. The satellite malfunction comes shortly before the start of the 2013 Atlantic hurricane season, which NOAA expects to be active. And while the offline satellite won’t affect the weather forecast now that the backup satellite is in place, it leaves meteorologists without recourse in case the backup satellite also experiences technical difficulties. 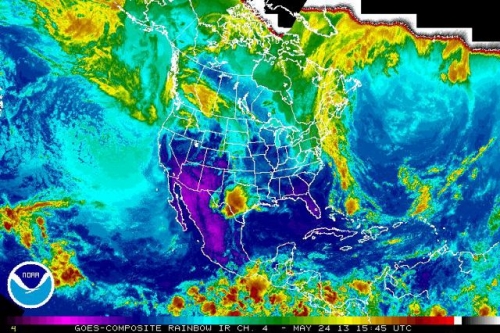 Further, experts say, it draws attention to the erosion of the United States’ weather and climate observing infrastructure due to budget challenges and mismanagement.

The ailing satellite, which engineers have been working to repair since Tuesday, is tasked with observing weather systems in the eastern United States and the Atlantic Ocean, and is known as GOES-13, or “GOES East “. It is a geostationary satellite, which means that it stays in a fixed orbit at an altitude of about 22,300 miles above the equator, allowing it to keep a constant watch over the Earth, taking lots of satellite images which are broadcast on the weather programs on television. Satellite data is also fed into computer models used to predict the weather and observe the climate system, meaning any gaps in satellite data could decrease the accuracy of predictions.

Thomas Renkevens, deputy division chief of NOAA’s Satellite Products and Services Division, told Climate Central that he expects GOES-13 to be returned to active service, even though engineers have not yet identified the cause of the failure.

“I’m pretty confident we can get him back,” Renkevens said in an interview. “The engineers are smart and it doesn’t look like anything catastrophic has happened. Everyone is working hard to find a solution.

More importantly, Renkevens said, data from the backup satellite, known as “GOES-14,” ensures that forecasters will have access to East Coast and Atlantic imagery when hurricane season begins. .

“We’re not blind in the Atlantic, so we shouldn’t have to worry about anything sneaking up on us and going unnoticed,” he said. The United States has only had one GOES satellite for about 20 years, he said, and if the backup satellite also encounters technical difficulties, NOAA would rely more on its international partners. for meteorological data.

NOAA policy has been to keep two GOES satellites in orbit at all times, along with a backup. However, the first next-generation satellite as a GOES spacecraft will not be launched until the fall of 2015. satellite R to slip, which could lead to a period without any redundancy in deployed satellites, as current satellites begin to exceed their rated life. 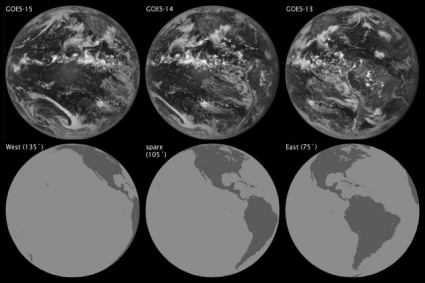 NASA image showing the visible images acquired by the three GOES satellites on September 15, 2012 (top row) and the field of view of each satellite (bottom row).
Credit: NASA Earth Observatory.

“Any further delay in the GOES-R program would likely increase the risk of a gap in satellite coverage,” the GAO report said. The GAO has also included climate change risk management on the same high-risk list.

Marshall Shepherd, director of the atmospheric science program at the University of Georgia and president of the American Meteorological Society, said the replacement satellite should avoid any significant data disruptions — for now.

“I think immediately everything is fine because GOES-14 is in place as a ‘spare wheel’, but what if our ‘spare wheel’ goes out?” Shepherd said in an email to Climate Central. “Well, then we probably have to share the European satellite. We’ve done that before. However, it’s not optimal and it’s a band-aid.

“More importantly, there are discussions. . . this [the] escrow could delay the GOES-R series (the new “tires”). This underscores the growing need to elevate our weather infrastructure to the level of public safety and national security infrastructure. The lives, property and economy of the United States depend on such diligence,” Shepherd said.

Before the receivership took effect in March, NOAA officials warned Congress that the cuts would jeopardize the GOES program schedule. For example, Acting Commerce Secretary Rebecca M. Blank told the House Appropriations Committee in early February, “This delay would increase the risk of a gap in satellite coverage and decrease the quality of weather forecasts and warnings.”

“It’s not clear that the coming years of investment will be able to undo some of the damage, especially to our weather preparedness.”

If the GOES-R series of satellites are delayed, it would put the GOES program on a troubled trajectory similar to that of the Polar satellite program. A one-year gap in polar satellite coverage is likely to occur in 2017, potentially degrading the accuracy of medium-range forecasts. NOAA said that without the polar satellite data, simulations indicated that the five-day forecast for Hurricane Sandy would have shown the storm heading out to sea, rather than veering sharply toward the Jersey Shore.

NOAA has racked up billions in cost overruns for the next generation of polar-orbiting weather satellites, and Congressional delays and budget issues have delayed that program, known as the Joint Polar Satellite System (JPSS), by years. .