Roads across the state are now covered in floodwaters as multiple watch and action alerts are issued.

Huge falls are also impacting Tasmania, which could see up to 200mm of rain in just 24 hours.

The SES has already responded to 1,377 calls for help in Victoria in the 24 hours to 1pm today, with the worst weather forecast for the state yet to come.

Of those calls, 911 were for flooding, 193 for downed trees, 153 for building damage, and crews performed 12 floodwater rescues.

A massive 129mm of rain had already fallen at Strathbogie North in central Victoria at 9am today, while overnight gusts reached 109km/h at Mount Hotham.

A severe weather warning for damaging winds and heavy rain is in place for most of the state.

“As heavy rains head towards metropolitan Melbourne, many roads are likely to close due to flooding or will be impacted by floodwaters, fallen trees and debris,” the department said.

The heaviest rainfall is expected to hit Melbourne from late afternoon until evening, with 40mm of rain expected in the western suburbs and up to 60mm in the north.

Parts of regional Victoria are starting to flood

There is already water on major roads, including the Melba, Hume, Calder and Maroondah highways.

Buses are replacing trains on sections of the Shepparton, Albury, Echuca, Swan Hill and Warrnambool lines, due to extreme weather and flooding affecting parts of the rail network.

The Ministry of Education informed that a number of schools and kindergartens across the state have closed due to flooding or flood risk.

In central Victoria, Broadford Secondary School was closed at lunchtime, with all pupils sent home by bus to undertake remote learning for the rest of the week.

Residents of Rochester, 180km north of Melbourne, have been told waters could potentially rise 115m above sea level, affecting hundreds of homes.

Thousands of sandbags were filled and residents were told to evacuate after doing their best to prepare their homes and businesses for flooding.﻿

Up to 80mm of rain is expected in northern and western Victoria today, with isolated totals of 120mm or more.

Castlemaine, Heathcote and Bendigo roads also began to flood, cutting off parts of the town.﻿

A Heathcote resident told 9News Melbourne she had never seen such severe flooding.

In Echuca, residents have been advised to boil their water until further notice after stormwater entered a treated water storage tank.

More than 1,000 people are currently without power in Echuca, according to Powercore.

There are also outages in Bendigo, Daylesford and Rochester.

The SES has received more than 200 calls for help in the past 24 hours, mostly for minor flooding.

About 100 people were evacuated from Falls Creek yesterday due to a slow-moving landslide cutting off the access road.

Victoria’s Emergency Management Commissioner Andrew Crisp told 3AW the state will continue to see this cycle for the next six to eight weeks.

Crisp warned the state would be “in this area for a while”, with Victorians for a “countryside flooding event”.

Tasmania is also expecting flooding, with up to 300mm of rain falling in places today.

As of 9am today, a total of 185mm had already fallen on Great East Lake and 148mm on Lake Mackenzie.

There are currently heavy rains and major flood warnings in place for northern Tasmania.

New South Wales is also in the crosshairs with rivers still swollen from recent rains.

A woman and her daughter had to be rescued from flooding in Forbes, in the midwest of the state. 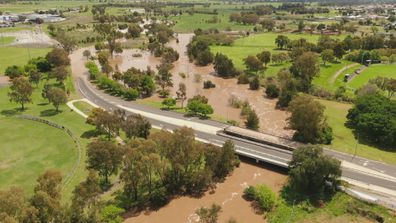 Hundreds cry for help as heavy rain rolls through NSW